While I am working in the studios of Kvennaskólinn, I hear the rhythms of the textile instruments me and my colleagues artists are using, these echoes from generations of women making textiles, are playing the stories of the first settlers traveling across the cold sea, adapting to this new land and its specificity. I feel connected to the rhythms of the past by listening to the soundscape created by the vibrant wooden sounds of the spinning wheel, the weaving loom, the shuttles and the bobbins I am using.

Textiles are cultural markers and they contain more stories than most people would think. After having the chance to listen to the presentation of Marianne Tóvinnukona and Marled Mader, who reproduced a Viking aprons dress during a residency here at the Textílsetur Íslands in Blönduós, I got more intrigued by the specific weave structure used by the first settlers of Iceland. I started to think about the weavings that were created here since the 9th century and I researched the patterns and structures used by the Vikings. In historical readings you can read that the Vikings used the tabby (plain) weave structure for the underdresses and shirts that were mostly woven with linen and hemp fibres and the pants, jackets and apron dresses were woven in wool to protect from the cold, in a broken diamond twill. This asymmetrical diamond shape made me curious about the cultural heritage that can be seen throughout the threaded lines of this traditional textile structure.

I researched the origin of the diamond shaped pattern and it took me all the way to Syria… The Vikings traded textiles with the middle eastern country, and took the exotic pattern home to northern Europe. Eventually, the nordic women tried to reproduce the beautiful shape and they adapted the pattern to created a broken diamond twill, which is, compared to the symmetrical diamond twill, a diamond shaped figure with a one row offset. Why this mutation happened seems to be answered by the loom that was used in the 8th- 11th century by the Vikings. Marta Hoffmann researched the weave structures used in northern Europe and in her book about the Warp-Weighted loom she says that the broken diamond twill was easier to weave on this loom than the diamond twill which was essentially woven on a different loom used by the Romans and in Mesopotamia.

But that is not the end of this interesting story, when I met Ragnheiður Björk Þórsdóttir, textile researcher and textile arts professor in Akureyri, we discussed the mutations of the diamond twill, and she explained that this pattern was also modified by the Icelanders after the first settlers had adapted their warp weighted looms here in Iceland. The Icelandic version of the diamond shaped twill is very specific to the environment encountered here, near the arctic circle. The Icelandic weavers added a tabby line between the pattern to compress the wool into a warm and dense fabric.

There is much more to write and to research on this one simple pattern. I love to read between the warp and weft to find the stories of our ancestors, and I keep on listening to the soundscape of textile art and their rhythms that are humming the stories of the past.

Sitting in the fantastic weaving studio at the Textílsetur Íslands in Blönduós, enjoying the vast panoramic view of Northwestern Iceland, I think about the wilderness, the roughness and the isolation of this small town.

I start to wonder about times before the roads and modern heating systems. The times where there was no road no. 1 connecting the north to the south and the villages to towns. How did the first settlers of Iceland adapt to the fresh, blowing wind that is still so chilly, even in mid-june? 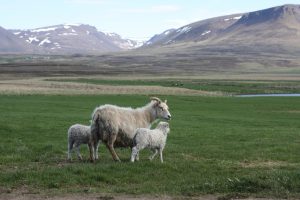 Looking at the scenic seaside my thoughts start wandering and I imagine myself here in a different century. Even if I know that Blönduós was founded during the 19th century, I imagine myself here at the times of the Vikings, arriving after an epic journey on the cold and rough Norwegian sea somewhere between the 9th to the 11th century. Trying to adapt to the isolated cold winter season on an Island surrounded by ice and and snow. 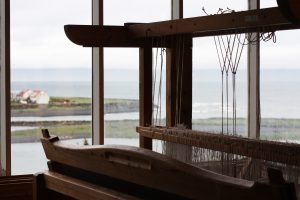 Looking at the old-fashioned floor looms around me, I am imagining the weavers of the past creating soft and warm fabrics out of wool to keep their loved ones warm. The very same wool I have been learning to tame since the day I arrived in Iceland. The wool that seems to contain the beautiful wilderness of this Nordic country, and that materializes the rawness of its surroundings. The wool that comes from the northern Europe short tail sheep, brought by the Vikings from Norway and isolated on this island so that it became one of the purest breeds of sheep in the world. The wool that I am learning to spin, that I have dyed with different Icelandic plants and that will be my chosen material for this month of artistic research and exploration.