The first game of Iceland’s World Cup is in the books, a 1-1 tie against Lionel Messi and Argentina. I’m not usually a football fan, but I found myself bouncing, leaning, clapping, and cheering with the locals at the Blönduós community center, as Iceland held its own against a dominant Argentinian offense. The Icelandic goaltender, a 34-year-old filmmaker named Hannes Þór Halldórsson, made a few showstopping saves, including a penalty shot from Messi to prevent Argentina from taking the lead. When the clock finally ran down, you would have assumed Iceland won by the reaction of the crowd. The nation of 325,000 people, smaller than .01% of Canada’s population and .001% of the United States (both of whom didn’t qualify for the tournament) is the smallest ever to qualify for the World Cup, and they were heavily favored to lose.

I have written extensively in the past about the troubling aspects of professional sport and their relationship to identity and nationalism, and one need only look at the fallout of the Vancouver Canucks Stanley cup loss in 2010 or the Montreal Canadiens early playoff exit in 2014 to know what I mean, but these examples can be elaborated on another day. Today we witnessed the unexpected from a nation and a team that continue to pull off the unexpected. The coach doubles as a dentist, and another player delivers salt. With many of the players having “day jobs”, Iceland was never supposed to qualify let alone tie the top-rated team in their division. But who doesn’t want to see the underdog win? Especially a country so saturated in football, where one can’t walk anywhere without seeing children kicking a ball or more than five minutes without walking past a fully equipped amateur field. It really is a once in a lifetime (or maybe a once ever) experience to be in Iceland during this historic run. But as I, the visitor, take in the passions Icelanders have for football, I’m reminded of the other cultural feats Iceland excels at. 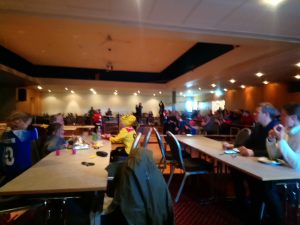 (The Overflow Seating at the Blönduós Community Centre, where locals gathered to watch the game. Image by me)

During the big bang of the mind roughly 50,000 years ago, humans began living in cities and developed religion, technology, and craft. Religion and art come out of this era, with professional sports later depicted in cave paintings around 15,000 BCE. I would like to remark on each because they are supplemental to human survival and are perpetuated on belief and faith. Artists gather in strange places to participate in obscure projects on the faith that someone will either care or the project will in some way have transcended the moment. Work that gets deemed exceptional gains followers who gather in concert halls or in galleries to be admired by the public. Followers of sports teams show faith in front of TV’s and stadiums, rooting for their team through wins and losses. Religious institutions are built on faith in a higher power, and many people I’ve met who participate in faith-based activities believe that all things done through the institution are in divine hands. With this faith, followers often raise extraordinary sums of money to build churches and conduct community work, with religious institutions playing key roles in historical cultural movements. In each instance people gather and experience something that transcends our individual lives, and as some believe, our own humanity. Based on what we know scientifically, each are equally superfluous and irrational, but each are integral to our constructions of culture. (Sorry to the devout reading this. Much respect to all of you <3)

,000 would suggest. Iceland is a cultural powerhouse, producing world-renowned musicians such as Sigur Ros and Bjork and visual artists like Olufar Eliasson (among many, many others). One in ten have published a book, and they have a rich literary history dating back to Iceland’s settlement by the Vikings in the 9th century. Their island attracts 4.4 million tourists a year, over ten times the total population. Icelanders have many iconic churches, including the Blönduóskirkja here in Blönduós, but also have rich folklore that tells stories of elves, dwarfs, and fairies. The unlikely World Cup appearance and incredible tie with Argentina, when considering the cultural context, is continuing a long tradition Icelanders have of excelling internationally in cultural endeavors. So what of Iceland’s larger-than-itself cultural impact? One thing to consider is Iceland’s accrued soft power, a term used to describe a nations international influence not through coercion or force through economics or military (Iceland doesn’t have a standing military), but through co-option (encouraging others to want to be like you). Take for instance Iceland’s handling of the 2008 financial crisis, where they bailed out the people rather than the banks and jailed many business leaders and bankers. This gets referenced when talking about alternatives to America’s response that saved the failing corporations while the people lost their savings and homes. Iceland has a long history of gender equality and is often rated among the most equal nations in the world. Most Icelandic energy needs are met through renewable sources, making Iceland a global leader in climate change. This is in addition to the envy by the many large nations on the outside of the world cup, the nations that have few notable artists, and have coopted spiritual practices. It remains to be seen how far Iceland will go in the World Cup tournament, but a 1-1 tie to Argentina is another in a long list of exceeded expectations.