In the studio at the Icelandic Textile Centre: learning tapestry weaving with Ragnheiður Björk Þórsdóttir, expert weaver and researcher at the Blönduós Research Centre.

Key to our time here is slowing down; experimenting in the studio, taking long walks, recording sounds, reading new books. Slowing down also speaks to how we’re learning, and yesterday was a first example of how as students, so lucky to be doing a field course abroad, we are taking the opportunity to ground our activities in local knowledge, history and experiences. Jóhanna Pálmadóttir, director of the Textílsetur Íslands (Icelandic Textile Center) since 2011 and spinning teacher for 25 years, led us on a day-long spinning workshop. While most in the group were sitting down at a wheel for the first time, making yarn was but one part of our learning.

As our first workshop, it was the chance for students to become familiar with the history and community work of The Icelandic Textile Center. Housed in what was previously the Kvennaskólinn women’s college the centre hosts among other initiatives a residence for international textile artists. Jóhanna recounted stories of artist collaborations, outdoor performances, and (our favourite) a knitting workshop that takes place in the local hot tub during the annual knitting festival. We also learned about the ongoing, collective Vatnsdæla Tapestry project. Based on the local saga of the same name, it tells the family story of the people of Hof. Jóhanna spearheaded the project, which has welcomed the participation of community members, tourists, and Icelanders from across the country — including a man in his late eighties whose mother had attended the Kvennaskólinn in her youth.

Once thrust into the art of spinning, we dug into a pile of Icelandic fleece, modestly beautiful in their natural hues of cream, brown, and almost black. Our fingers quickly took on the distinct scent of lanolin as we touched the fleece and learned about the Þel  — the inner wool that keeps the sheep warm (great for felting) and the Tog — the downward facing, water repellent overcoat that keeps the sheep dry and protects them for the wind. Those who hadn’t spun before developed new appreciation for the skill required to make the yarn that produces, among other things, the distinctive Icelandic sweater. Jóhanna told us if we kept at it we’d one day be able to spin without thinking about it. By the end of the day we were still far from that point, but nonetheless improved over hours of laughter and concentration, surmounting the odd frustration and stumbling block.

From the workshop we made our way to Jóhanna’s family sheep farm a few kilometres away. Bought by her grandfather in the 1920s, it sits on 700 hectares with a small lake and not-so-small mountain range as its back drop. Its location off the main road can mean a 20 minute drive into town can take up to 1.5 hours in winter storms, but its unique position relative to sea level also meant it was spared the spring snow that recently fell on its immediate neighbours. The lake is cold but swimmable, and also used by fishermen from away. We toured the barn made by her father in the 1960s, which her son Pálmi Gunnarsson plans fix this summer as he takes over the farm from his parents over the coming years. We learned from his girlfriend Þuríður Hermannsdóttir, who is studying veterinary medicine in Slovakia, that the cost of farmland is now beyond the reach of most young people in Iceland who dream of such a life.

‘It’s like cream’ — this was how Jóhanna described the sight of thousands of mostly white sheep moving together in preparation for the journey back south from the highlands after three months of grazing. On the first Saturday of September they are herded and sorted in a massive pie formation by their respective owners in a day-long community event. Yesterday, only a few weeks from their departure on this annual journey, young lambs frolicked in the pastures, already squeezing through the fence and being called back by the ewes. Nearby, day-old newborns huddled with their mothers in pens in the barn — some drinking milk, others just learning to stand. Another had passed away only hours earlier, its small body taken by Jóhanna to its mother in the hopes should would then take on another lamb whose own mother was rejecting it. With a flock of 400, the whole month of May meant constant back and forth to the barn for Jóhanna and her husband — for the younger generation, it meant spending full nights sleeping there, on 24-hour call in case of complicated births .

Seasonal farming patterns and rural traditions. The life cycle of sheep and the composition of their fleece. Late afternoon light reflecting off of a newly delivered placenta on the barn floor, the ripe smell of hay, and the vast views from a farm passed down through four generations. These are some of the vivid and much appreciated memories that grounded our spinning workshop yesterday. They also complemented the sage advice that when spinning, both hands must be doing something, and the encouraging words that if you struggle, you just may become a better spinner for it.

Our day of learning with wool (6 hours of spinning practice barely scratched the surface!) ended with a visit to the source of the precious fibre: Jóhanna Erla Pálmadóttir’s family sheep farm on the lakeside at Akur, outside Blönduós.

We got to visit the barn that serves as home for the new lambs and their mothers in the first three days of their lives, before they’re released to the healthy air of the spring fields then summer highlands. How remarkable to be in the presence of such vital new life, the often fierce protectiveness of the mother sheep, and the beautiful raking sunlight — Old Master paintings in-the-making all around us. Thank you, Jóhanna!

Two years ago I was enraptured by my first visit to Blönduós, here for a residency at the Icelandic Textile Centre. On this anniversary I’m back for a second trip — with 13 ConU students as part of the Iceland Field School. Today as the sun burns off the morning fog, we are working with  Jóhanna Erla Pálmadóttir at the Kvennaskolinn, where she is patiently teaching us how to spin Icelandic wool! Horrible/fabulous to be an incompetent beginner at something again! 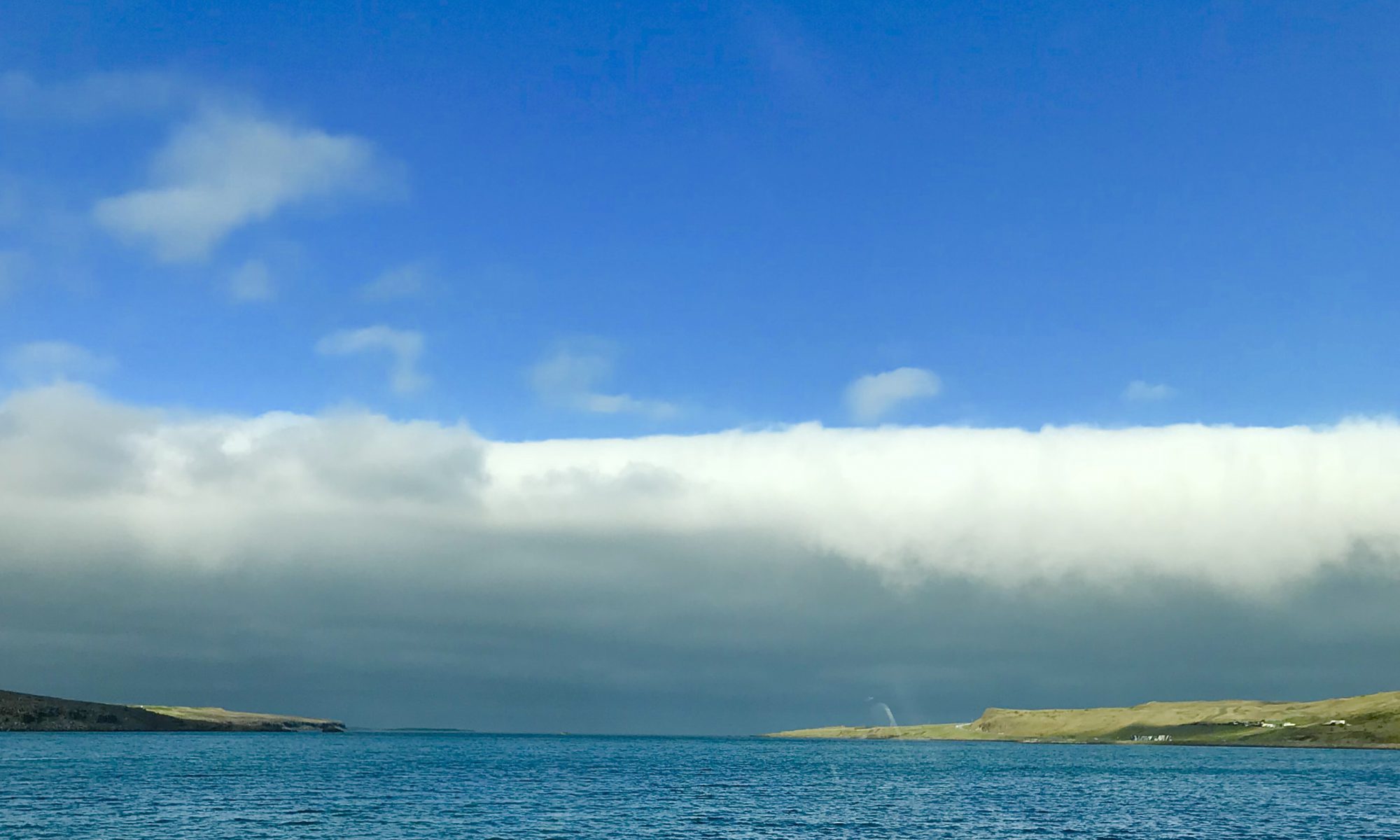 Before arriving at the Icelandic Textile Center (Textílsetur Íslands) in Blönduós, I did some research and was elated at what I read and the images that I saw; not only was the location ideal for working with textiles and learning new skills but also for getting inspiration. My expectations were as high as my excitement. The image of Iceland as a country

lingered in my mind. Luckily, upon arriving to Reykjavík, I was greeted by a kaleidoscope of colors in both the sky and land. This was only the beginning of a journey of discovery and awakening. These initial images that I took as my journey from Reykjavík to Blönduós began were only the tip of the iceberg; what was yet to come was beyond my imagination.

While my first impression was a great one; the rest of the scenery that I began to see as my trip was unfolding was breathtaking. My view was not blocked by big buildings and polluted air. I was able to see mountains and blue skies with land that stretched beyond my immediate vision. As I took a breath, I felt the air fill my lungs and my eyes began to see more beautiful details at every turn. As an artist and researcher, this was the perfect location for inspiration.

As I began to get ideas from the different shapes and colors as well as the amazing natural vista, I took out my sketchbook and began to draw. The more I looked around, the more I wanted to meet people and learn about them, their culture and connection to the land. Our connection as human beings to the land and how we treat it has always been important to me and is a consistent theme in my artwork, and I felt that this connection is also present in Iceland as nature is clearly protected and preserved. I am looking forward to the rest of my experiences in this breathtaking country.

On Sunday, June 3, the Concordia contingent in Blönduós had our first opportunity to work together in response to a local knitting group’s request: come and help us decorate the town’s lamp posts for the Knitting Festival (June 8-10, 2018)! Each summer since 2015, dozens of lamp posts are dressed up in local knitting, a version of yarn bombing that has become the town’s international signature.

Students worked singly and in pairs, making an afternoon’s work of an installation project that normally would take the core group of yarn bombers a week or so to put in place. The Blönduósi were grateful for our help and we had so much fun! Even the weather cooperated, being reportedly the warmest, driest installation date in memory. (Local trick: if it’s really cold, use a plastic rather than a metal yarn needle, since the plastic won’t freeze your fingers!) 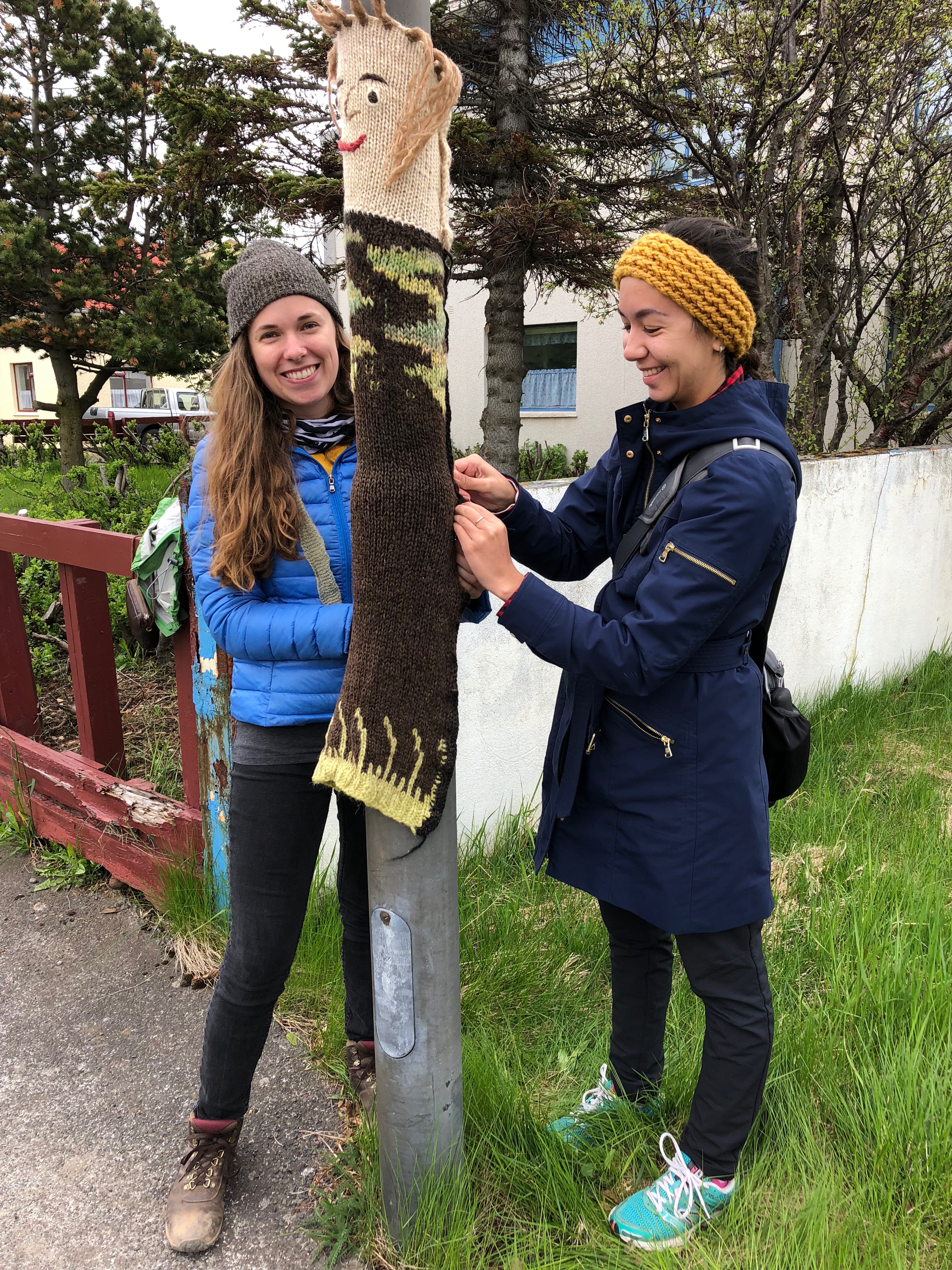 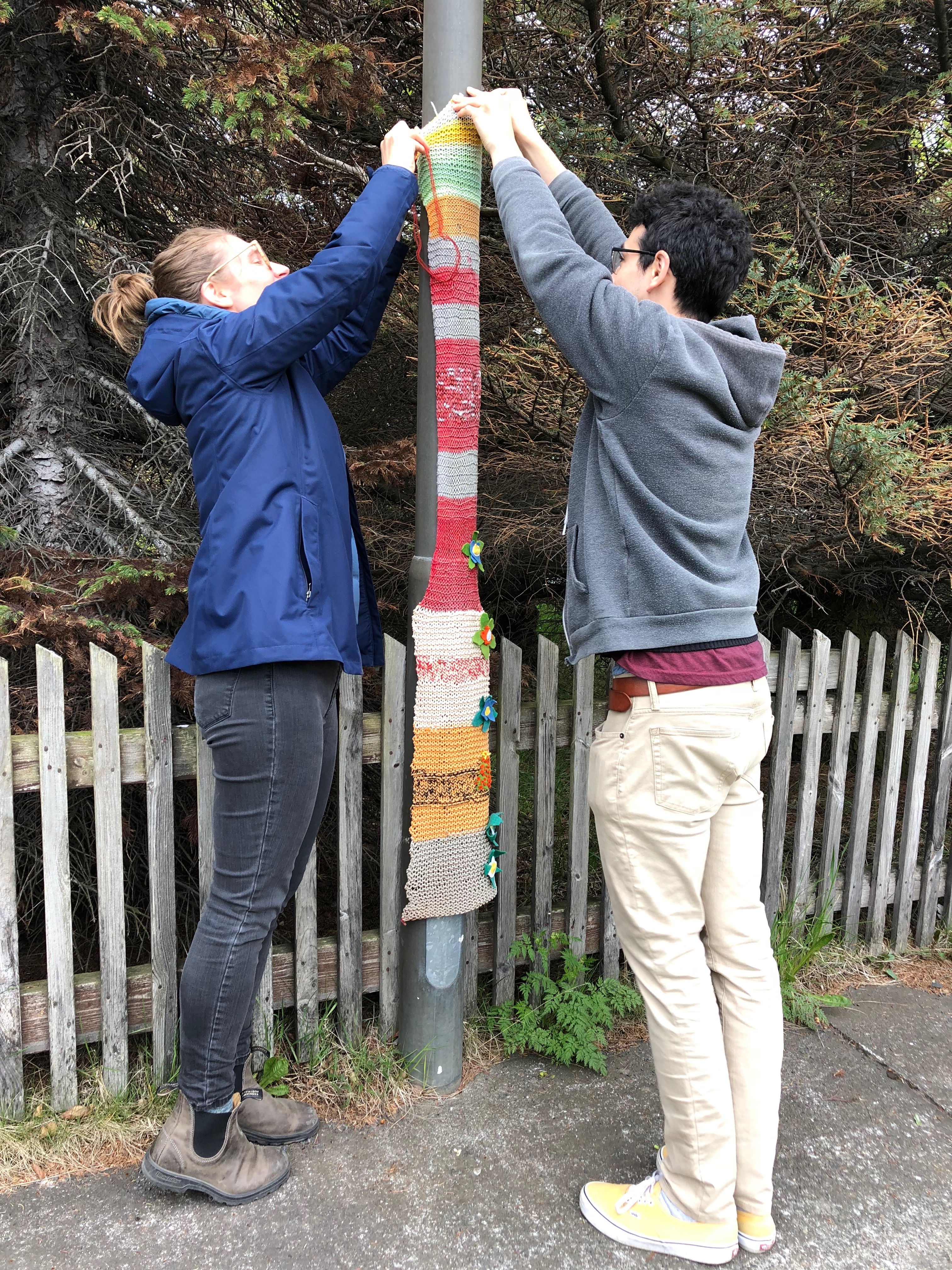 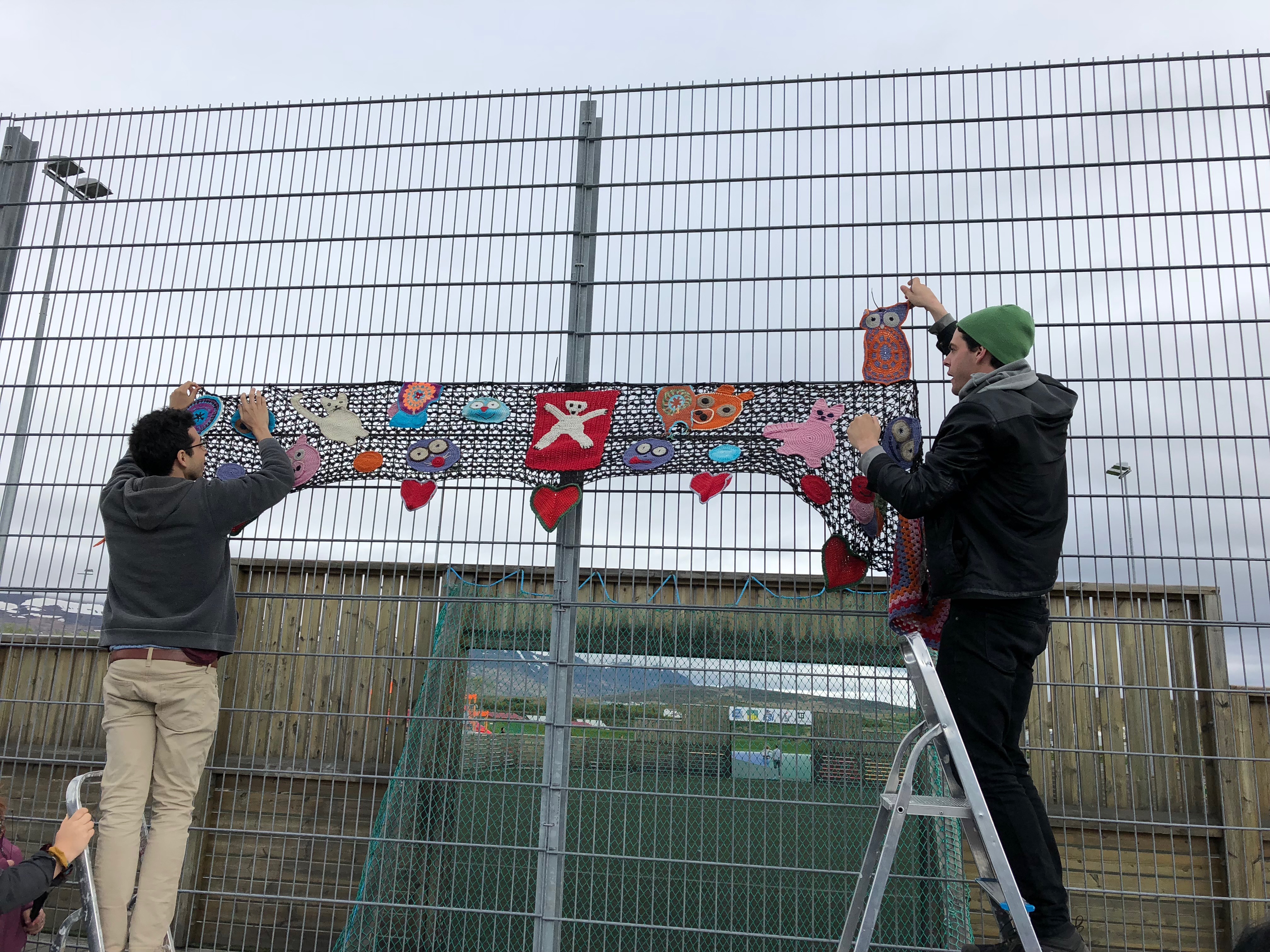 Day one of the month-long Iceland Field School here in Blönduós. 13 Concordia university students, BFA to PhD, are here with me, developing their own research and creation projects in conversation with this very special context: the people, creatures and places. The long light-filled days are particularly conducive to exploration, reflection and transformation! (The photo above was shot at midnight yesterday, when I finally turned on indoor light to help my hand stitching.)

Thank you to Textilsetur Islands/the Icelandic Textile Centre (especially Jóhanna Erla Palmadóttir) and Concordia University for believing in this project and helping me bring it into being.

And so the Iceland Field School begins, in long, long days full of reflection, research, creation and transformation. Coming from Montreal, 45.5017° N, where the sun sets by 9 p.m., it’s astonishing to experience the luminous and lengthening spring/summer days here at 65.6601° N in Blönduós. The place surges with the energies of new life and boosts our own delight, as well.

I’m delighted to announce my chapter in the new, fourth edition of Relate North, the remarkable series of publications about Nordic art and design edited by Timo Jokela and Glen Coutts. My chapter describes my own experience at the artist’s residency in Blönduós, and begins to consider some of the preoccupations of the Iceland Field School: the positionality, pleasures and obligations of the stranger/artist in residence, the ethics of engagement across difference, the possibilities and limitations of place-based work in a new place. This chapter is on the Iceland Field School’s reading list!

The full edition of Relate North is available for free download here.

The Concordia University Iceland Field School was sparked by my own exceptional experience in Iceland — responding to the remarkable landforms, people, and the delight of the freedom and focus of my artist’s residency at the Icelandic Textile Centre | Textílsetur Íslands in Blonduos. Even while still in residence, I began to imagine developing stronger ties and contemplate the possibilities of working in collaboration with the university and Textile Centre to bring my students to work and learn in this powerfully meaningful and transformative context. I am so grateful that both institutions were open to imagining the future along with me.

As part of the mobilization towards the Iceland Field School, and with the financial support of the Concordia Centre for Interdisciplinary Studies in Society and Culture (CISSC), in September 2017 I organized Imagining Iceland: From Concordia to the North. This happening featured four Concordia-associated artists and scholars, exploring their significance of Iceland to their own research and creation. 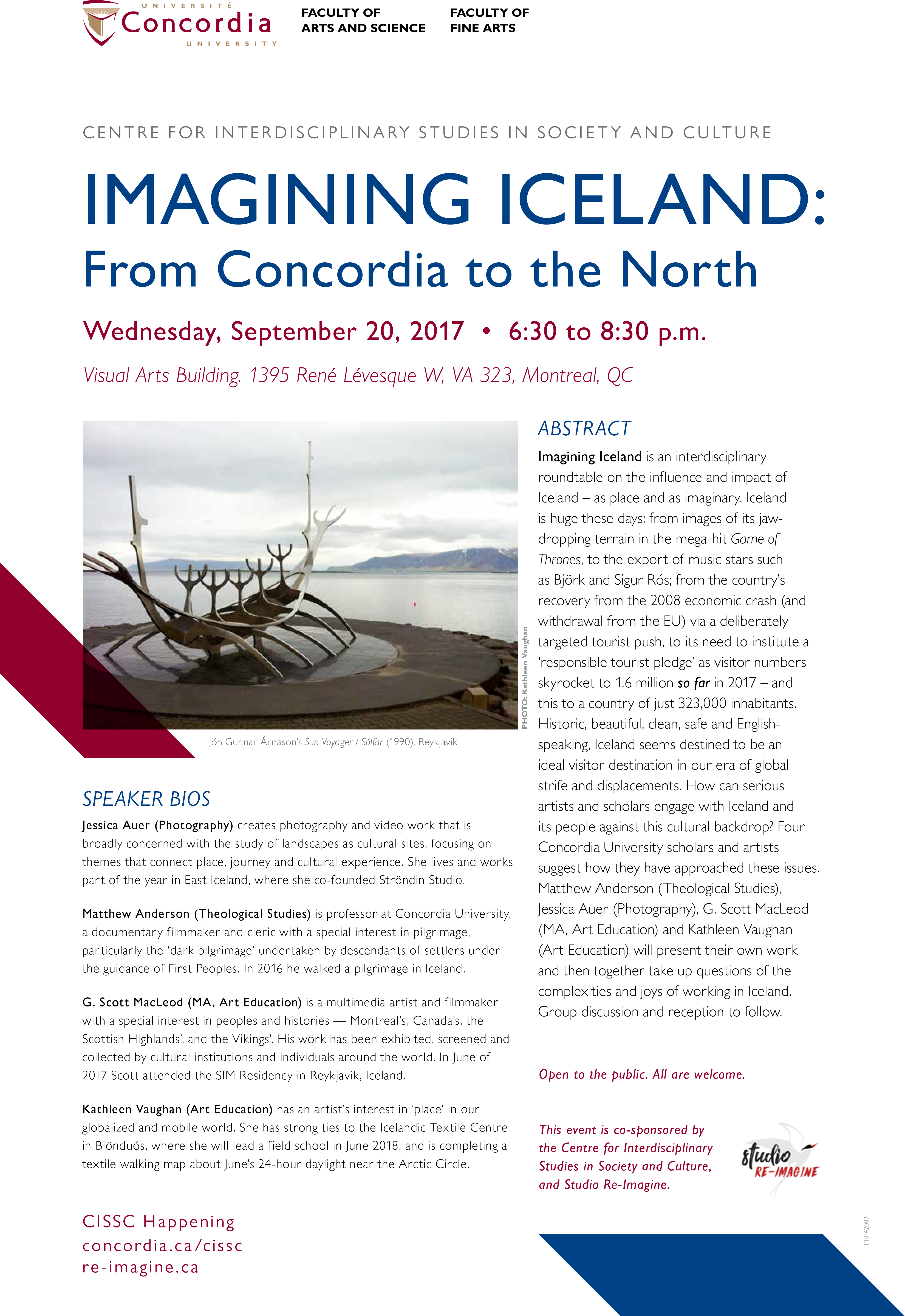 Video of the session can be seen here:

Imagining Iceland: From Concordia to the North from Kathleen Vaughan on Vimeo. Thanks to Margot and Valerie for production and editing.

Additional Iceland-focussed activities will be organized for the Concordia community in 2019, lead-up to what I hope will be the second iteration of the Concordia Field School in 2020 or 2021.